United Contractors (UCON) is the leading union contractors trade association in the state of California, representing heavy civil engineering companies of all sizes and that perform critical infrastructure work including: grading, paving, utility, bridge, pipeline, power, water, transit rail, airport and more. UCON presents annual R.E.A.L. Safety Awards – Recognizing Excellence, Awareness, and Leadership in Safety. The safety awards program has been developed to highlight the importance of safety in the industry, as well as honor some of the safest contractors in our association. The program is open to all UCON contractor companies. Winners are chosen within eight different categories: man-hours worked, most improved incident rating, and safety hero of the year. In addition, “TEAM ZERO” recognizing those having a zero incident rate for the 2014 year. 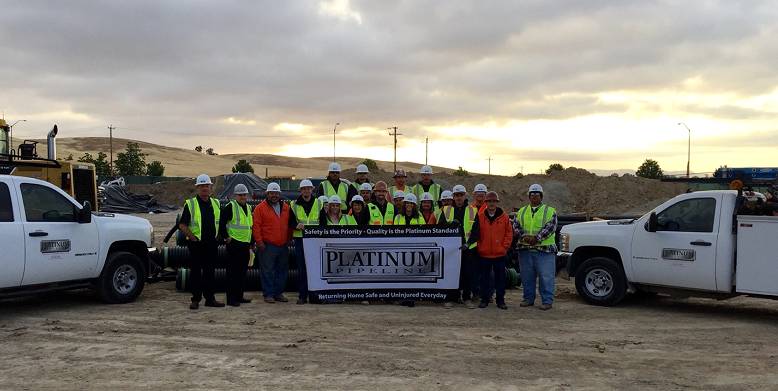 “We are honored to be among the 2014 R.E.A.L. Safety Award recipients and congratulate those who deserve the recognition most – the entire Platinum Pipeline team! It is the dedication, diligence and consistency of each and every one of our crew members that has allowed us to set the bar high for a safe and injury-free workplace. Without compromise and from top to bottom, safety IS the PRIORITY. Maintaining the mindset that every minute counts and creating a culture where everyone is accountable to each other are essential components of our safety program. While a significant amount of effort is devoted to how our safety policies and procedures are documented, the effort devoted to how those policies and procedures are observed, implemented and executed in tenfold. Platinum quality is defined first by our Platinum-quality safety!”
– Manuel de Freitas, President/CEO, Platinum Pipeline, Inc.

* “TEAM ZERO” – recognizes those having a zero incident rate for the 2014 year.